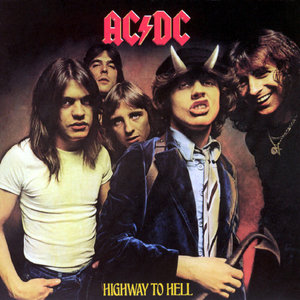 How did my research on the history of the refugee camp lead me to AC/DC? It’s not as long or unlikely a story as you might think.

I’m in Australia at the moment on a month-long fellowship at the University of Melbourne. I’m using my time here to understand Australia’s policy of mandatory detention of asylum-seekers in the context of the history of the refugee camp. There’s a difference between a refugee camp (usually set up for a large number of people arriving over a short period of time) and a detention centre (usually set up to hold smaller numbers of people arriving over longer periods of time), but I had a feeling that it would be useful to think about sites of detention in the same way I’ve been thinking about refugee camps.

My approach to the history of the refugee camp is to explore the ‘biography’ of specific sites—that’s what took me to Rivesaltes last year. Focusing on a particular place reveals continuities and connections that you can miss if you focus either on high-level decision-making (whether by politicians or the chiefs of humanitarian agencies) or on specific groups of refugees: continuities over time, where one site is used to house multiple displaced populations, and connections with other forms of encampment and ‘immobilization’ of different mobile populations, from prisoners-of-war to holidaymakers.

One place that I’ve just learned about is a good example of this: Villawood.

Today, Villawood is an immigration detention centre in the western suburbs of Sydney. (You can read Safdar Ahmed‘s comics reportage about it by clicking the image.) But it started life as an explosives factory, set up by the Australian government in 1941 to produce the active ingredients of Allied munitions during the second world war: this picture shows two women operating a detoluator machine—no, I don’t know either—to produce nitric acid there. 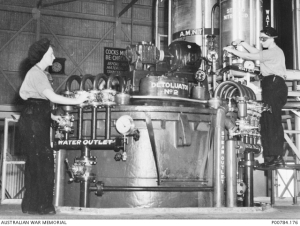 After the war, the Australian government encouraged mass migration, to offset the country’s geographic isolation and small population: these had made it feel very vulnerable during the conflict, when Japan’s rapid military expansion harshly exposed the British empire’s strategic weaknesses. Mass migration of Europeans, that is: the ‘white Australia’ policy was in full force in these decades. The government actively promoted immigration from Britain, but when this didn’t produce enough new Australians it looked elsewhere—first to the displaced persons’ camps of postwar Europe, and then to other European countries. A million people had arrived by 1955, and the policy continued for a decade or more beyond that.

On arrival, immigrants were provided with free accommodation in migrant hostels on condition that they look for work. The explosives factory at Villawood was scaled back and sold to a private company in 1946 (it continued to produce explosives and other chemicals until 2000; decontamination was only completed in 2015), and part of the site was converted into a migrant hostel using existing Nissen huts. I presume these had accommodated munitions workers, though I’m not sure. But this wasn’t uncommon—in the picture below, new immigrants are entering a Nissen hut at another former munitions factory site, at Maribyrnong in Melbourne. This picture was taken in 1965, and that migrant hostel, too, is the site of a detention centre today. 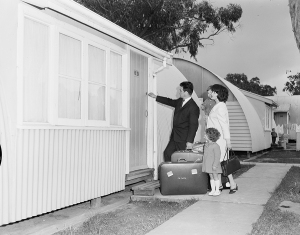 Conditions in these hostels weren’t great: at Villawood there were repeated protests in the early 1950s about crowded accommodation, poor food, and overbearing staff. (You can read about the hostel in this rather good 2008 essay [PDF] by Bethan Donnelly, then an undergrad at the University of New South Wales, which won a public history prize.) Later on it was upgraded, and photos from the 1970s show a fairly pleasant set of buildings, albeit located right next to a factory that was now producing weedkiller and insecticides. 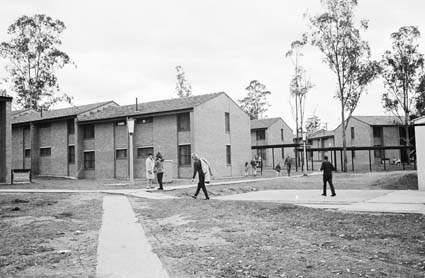 And this is where AC/DC come in. In 1963, William and Margaret Young emigrated from Glasgow with most of their eight children (one of the older boys stayed in Scotland). They lived in the hostel, where their son George met another recent arrival, a Dutch teenager who had just given up his foreign-sounding name Johannes Hendrikus Jacob van den Berg to become Harry Vanda. George and Harry played together in a successful late-60s band, The Easybeats, but as Vanda and Young they had a more lasting career as songwriters and producers for other acts. They produced the first several albums by the band that George’s younger brothers Angus and Malcolm formed in 1973: AC/DC. Angus Young, the youngest child in the family, was seven or eight when they arrived in Villawood: too old to sleep in a bassinet like this one, which was used on the site in the 1950s. But it was interesting to find out that he spent part of his childhood in a migrant hostel that was once an explosives factory, and is now a detention centre. 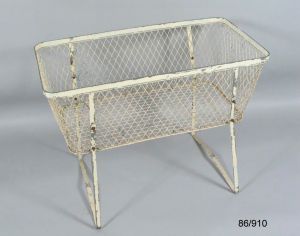 I’ll be learning more about Villawood this week, when I meet up with a PhD researcher in architecture here at Melbourne who’s writing her thesis about it. I may also go and see it when I’m in Sydney later this month, if I can do so without simply going to gawp at the barbed wire. But doing a bit of reading around about the site has already given me lots of new ideas—and helped me flesh out some thoughts I’d already had—about sites of detention and confinement.

Thanks to Meighen Katz, Mary Tomsic, and Savitri Taylor
for giving me pointers about the places mentioned in this post.

Click images for sources.
There’s no permalink on the National Archives of Australia
catalogue (annoying!): the photos from Maribyrnong and Villawood
are both in series A12111, respectively items (‘control symbol’)
1/1965/22/25 and 1/1970/22/25.